As usually is the way, as walk leader I tend to spend quite a bit of time in the day or two leading up to one of my walks checking the forecast.  In my latest venture, I saw that there was outside chance of some sleety/snowy stuff and high probability of some rain.  It was therefore to my complete utter surprise I woke up on the Sunday, pulled back the curtains and saw a complete blanket of snow covering the streets of Caversham where I live.  As the walk leader I had to make a judgement call whether to cancel the walk or not, especially having seen the forecast it was very probable there would be lot more snow on the walk, starting from Stoke Row to the north of Reading.  In the end I went with it and so glad I did.

Nine of us gathered outside Maharajah’s Well having carefully negotiated our way slowly along the Stoke Row road.  On arrival we started speaking to a local who had informed us that the village was out of power.  This was apparently due to branches from a number of trees falling down due to the pressure by the amount of snow that had fallen in the preceding few hours.  Although I had offered the walk to the Berkshire Weekend Walkers the entire attendance was 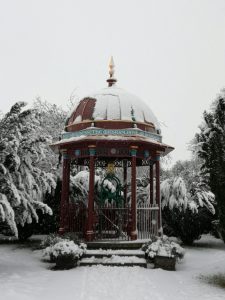 made up of our group.

Numbers would be increased later in the walk to eleven as a couple of people travelling in same vehicle were making steady progress but somewhat delayed and knowing that they had a map we agreed to start the walk, with their agreement as soon as possible.

Marharajah’s Well itself is an incredibly ornate structure built in the nineteenth century to supply the villagers with much needed water.  It was funded by the Maharajah himself having somehow got wind of the plight of the desperate need for the village to have running water.  It is a story well worth checking out if you have the time.

With a few of us taking a photo or two of the well, we were off.  This 7-8 mile circular hike headed off down Coxs’s Lane and Stoke Row Farm before branching off to open fields.  It was quite noticeable from this early stage that we would have a few obstacles to overcome; principally fallen down branches and small trees.  This was a very rare experience for us of walking in thick snow; it enabled us to stop and pause briefly for something us BW’s don’t partake in too often, a snowball fight!  It was quite tiring so we didn’t stop for long.  The route took us up to English Lane and then we headed westerly at English Farm.  At one point it was noted that not a soul had walked these fields that morning as the snow fell was completely unbroken.

Despite one or two minor navigational alarms we continued along occasionally pausing for a prerequisite photo opportunity.  Having progressed though Little Common and Bixmoor Wood we soon stopped for what turned out to be lunch stop number one.  I was aware the other two people were planning to meet us a little further along the route so did not want to pause for too long.  I had hoped we would be rewarded with pleasant views of the valley but alas the mist was not being kind to us.  Not to worry, we carried on and as we made a descent towards Well Place, we saw the other two coming towards us in the opposite direction.

Pausing briefly, they joined us and retraced some of the footsteps they had already made.  According to my OS Map there is a “Zoo” at Well Place but all we saw was a donkey.  Given the snowy weather you would have thought it to be ideal conditions for a penguin or a polar bear?!

I had warned the group we had a steapish climb to overcome and without complaint we tackled it including saying a hello to a few friendly cows.  Yes, they do exist!  The route got slightly trickier at this point as the footpath was briefly quite hard to pick up.  Indeed, on my reccy I went in the wrong direction for a brief moment or two.  No alarms on the day.   However, what I didn’t expect us to have to deal with is potential hazards from above.  As we traverse the footpaths in Braziers Common we heard the eerie sounds of a branch breaking from way above us maybe ten metres ahead of us.  It stopped us in our tracks.  Although the branch itself did not come down there was a plume of snow which we just avoided.

Before long we arrived at the pub, one 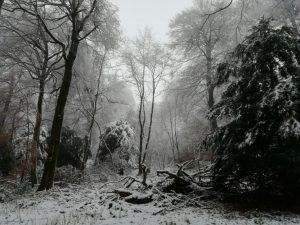 of my favourites, the Black Boy in Checkendon.  On arrival we were greeted by darkness in the pub with people supping their pints over candlelight.  Power had still not been restored to the village.  Unusually for us not only did we stay inside for our drink there was sufficient availability for us to sit down in the room at the back, a room I was not aware that had existed.  It was slightly unusual scene with us sitting in a circle, a couple of toddlers walking in to say hello and the lights flickering on an off.

It was not long before our epic snowy walk concluded and certainly one which I will remember for a very long time to come.